Note: In March 2007, while deployed to a remote part of Afghanistan while serving in the U.S. Navy, I wrote several stories from the battlefront to friends and family back home. This story recounts one of the many missions I went on.

Our convoy rolled out nearly half past midnight. Late. Our mission would take us well into the next day, and I had worked the whole day before that. As tired as I would be, my body has gotten used to the long, abnormal hours that life in a combat zone demands.

We drove around the twin hills that separate our post from the post of the 82nd Airborne Division. There we met up with a company-plus along with our battalion sized element of ANA and the cadre of ETTs that I was a part of. All told, there were nearly 300 troops staging for an operation in the Zormat District.

Zormat is a volatile place. It has been since U.S. forces arrived here over five years ago. It’s no secret that Taliban reside in the surrounding villages and still operate there; but finding them is the hard part.

Afghanistan, despite its plagues of poverty and war really is a beautiful country. The mountains scream high above the horizon and the open landscape blankets the countryside in a haunting beauty. National Geographic wasn’t kidding. Even at night, the view is enjoyable – the moon illuminates the sky which casts a deep blue silhouette of the mountains.

Several hours later and after getting lost twice, we arrive at the staging area. It’s alongside a field bordered by qalats roughly four clicks away from our objective point. There we break off. The ANA and ETTs move forward to surround the objective. Another platoon moves off to the south to set up a mortar position and the 82nd moves up to support the ANA. I was with the command group and we would move another click forward to set up our command and control (C2) center.

Louder than bombs are the sounds of happy children everywhere with new shoes, a school to go to or even just a muffin to eat.

From here on out it was a waiting game. Waiting for all elements to get into place, waiting to be spotted, waiting for contact, waiting for it all to begin. It was as if a Broadway musical was about to start. Lights dim and every one with their respective roles, ready to play their part.

At H-hour the ANA mortar team launched a series of illumination rounds over the objective. As the streams of light slid down the night sky, troops moved into position. Radio chatter became frequent and we monitored the positions and movements of all units on the ground. At the C2 site we set up a folding table and map board for battle tracking. We had a large floor plan of the compound that was to be cordoned and searched. With any luck, we would return to base with at least one, possibly more high value targets.

“Six this is Tree-Six, building one secure, over,” came the voice over the squawk box. The operation had begun. “Thwump! Thwump!” came the sound of two more illume rounds. 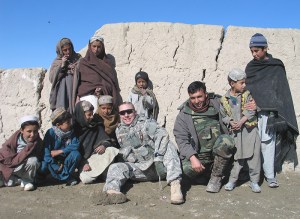 Every fifteen minutes or so we would receive another confirmation: “Six, Tree-Six, buildings two-two and two-four secure. At this time we have detained four individuals.”

And so went the operation. No shots fired, no serious resistance and more importantly no casualties. Apache attack-helos continued to fly a low circuit low as they had done all night just in case close air support was needed.

As dawn broke, the operation had been well underway for two hours. By this time, most of the buildings had been searched and just about all who would be detained had been; some we let go and others we retained for further inquiry. After the sun had fully risen, it became clear that we parked our Humvees in the middle of a local farmer’s crop field. Oops. It wasn’t intentional; we couldn’t have told that was a crop when we parked there. Our interpreters conveyed our apologies and gave the farmer a chit to return to Coalition Forces for reimbursement.

The dirt road we had pulled off of was narrow but opened up to fields as it exited a neighborhood of mud huts and qalats just 30 meters to our left flank. After a while several children appeared, peaking with curiosity from around the corner. By this time the bulk of the operation, and the most dangerous part of it were over. I waved to the children and yelled cheerfully, “Salaam!” It seems that all the children like to be around Americans, but I always try to reassure them that we are not a threat to them.

Myself and our Public Affairs Officer who was photographing the operation grabbed a box filled with muffins, Pop-Tarts and cookies that we packed to snack on and brought them over to the kids. Most children begin a frenzy when Americans have treats to pass out. These children were different. They were all curious but it became clear that they had not had much exposure to Americans before. Not like the kids in Kabul or Gardez who are well-trained to know that anytime Coalition Forces are nearby, there is something in store for them.

One by one each child came forward to receive a muffin or cookies. The families here are very poor and many of the children are too skinny. I know they eat, but how well they eat is a mystery. As they become more comfortable with us, the smiles grow. They all cheer and give us thumbs up. I want to give them all high fives and spaghetti, or balloons and pizza – anything that would make them happy and full.

Amidst a still unclear war and an often unknown enemy, I find simplistic escape in the children here. No matter the culture, they are the same as children everywhere. I see my brothers and sisters, your nieces and nephews, and children I know from back home in all of them. I am always captivated by the fact that amidst a combat environment, and while we park our vehicles in a family's yard to set up a security point, the kids don't care. They are innocent, curious, intrigued and all want candy. I love it. The children here are the peace in a global of conflict. And I am thankful to know that my children will not have to know what an AK-47 is before they see their first Rambo movie, or that frequent death and gore. Explosions and soldiers in their back yard will likely never be a part of their life. My best hope for these children is that they will someday have that same life (sans the Rambo).

We wrap up operations that day by conducting a humanitarian assistance mission. The compound we searched was large and only a few suspected insurgents were there. The rest were mostly other family, women and children. It wasn’t their fault, so our response was to give them clothing, nutrition and medical attention as a gesture of goodwill. In fact, most combat operations are conducted that way here. Even when convoys patrol towns, the gunners will toss soccer balls and MREs and bottled water to the townspeople. In many ways it has become an American tradition. 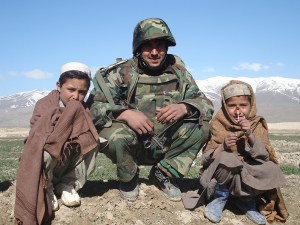 George Marshall, in the aftermath of World War II, fostered a plan to rebuild a devastated Europe through humanitarian aid. In every conflict since, Americans have replicated the Marshall Plan to those whose lives have been disrupted by war.

I know that force is sometimes necessary to preserve the articles of peace, but farthest from that is the impact of compassion and giving. Helping those who can’t help themselves is a commandment of Christ, a saying of Ghandi and happens to be the Third Pillar of Islam.

We are past the point in Operation Enduring Freedom where the objective is just brute force. We are still bracing for a large spring offensive by the Taliban, but that doesn't mean that we are in danger of losing a grip on the progress we've made. Now, in order to come home for good, we know that we must win the hearts and minds of Afghans. That's more than an IO plan, its genuine Americanism. Most troops here are truly interested in improving the Afghan quality of life.

The Taliban neglected to provide for even the most basic needs of the Afghan people. Education and health programs, reconstruction and $300 million in aid to the Afghans has begun a process that no terror group can compete with. It’s my own belief that when the Taliban see that they can’t compete with generosity and compassion, they will lose face to their own vicious nature. Any hope for them will be lost. Louder than bombs are the sounds of happy children everywhere with new shoes, a school to go to or even just a muffin to eat.

If you would like to participate, I would encourage you to contribute to the organization below. Most of all, your continued prayers will do. Pray for the continued safety of our troops and for the betterment of an Afghan society so we can come home.

I write you from a dank tent in a growing country, thinking of you, missing you always.

Please be encouraged to give to: