“For love of country they accepted death.” President James Garfield

As Memorial Day approaches, I have reason this year to be especially observant. Last year at this time I was in Afghanistan in support of Operation Enduring Freedom. Shortly before my arrival there, a good college friend of mine, First Lieutenant Forrest Ewens, was killed in the Pech River Valley in the northern part of the country. 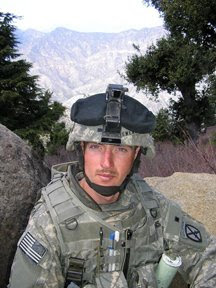 Forrest arrived with the 10th Mountain Division as a Platoon Leader. While on patrol on the volatile Pech River Road, Forrest’s vehicle struck an IED and he was killed. I worked closely in the first half of my tour with the 10th Mountain guys and asked many of them about their memories of him. Many knew him, and all revered his leadership, camaraderie and dedication to his country.

As we approach the second anniversary of the day Forrest gave the last full measure of devotion, I am grateful to him and his family in so many ways. Forrest played a big role (though I don’t think he knew it) in my decision to join the Navy. He was the kind of American we should aspire to be like, and we all miss him dearly.

Not too long ago I got a MySpace message from Forrest’s mother. She is another great patriot who has shown great strength and conviction. She has three boys including Forrest. All three are/were in the Army. I often think about her sacrifice ands imagine the burden she must bear knowing the sons she raised are bound in perpetual risk. But though it all she is encouraging. In her message to me she was, thanking me for being a friend and for serving. But secretly I think she must be haunted by the role she played in the rearing of three warrior boys. And as we look to Memorial Day and honor Forrest for his sacrifice, let us also honor his mother.

While Memorial Day is often reserved for American service members who died in combat, I will also be remembering the death of another this year. One of my duties while in Afghanistan was to manage a score of local national interpreters hired by the U.S.

Most of these guys are young, between 18-24 years old. In the wake of the Taliban’s fall in late 2001 many of them saw an opportunity to help their country. They learned English, and were hired to support the mission.

Of all Afghans, these guys are likely some of the most dedicated to their country’s struggle for freedom and independence. Their job is not simply to interpret conversations between Americans and Afghans. They are cultural advisors, laborers and friends to their American employers.

I remember once, when my team’s convoy was struck by a vehicle-borne suicide bomber and there were a handful of Afghan casualties in the wrong place at the wrong time, our interpreter got out of the armored vehicle, without armor or weapon and little regard for his own safety he began delivering medical aid to the wounded. His family later saw him on the news and asked him about it. Because many “terps” are worried about the security of their identities due to their high-risk professions, he denied the heroism.

When it comes time for American’s to conduct high-risk searches in buildings, these guys are right there in the line-up, usually the second or third to burst into a building, again unarmed. Truly, they are some of the most devoted to the cause to put themselves at this sort of risk, at only $900 and 4 days off a month.

60 minutes just aired a great story last week on local interpreters in Iraq. If any one deserves appreciate for their country, it’s these young men willing to sacrfice so much for love of country and the pursuit of freedom.

Mir Zaman Momin Khan was always one of my favorites. He had been working for US forces since their 2001 arrival and had the battle scars to show. Zaman walked with a limp. The s 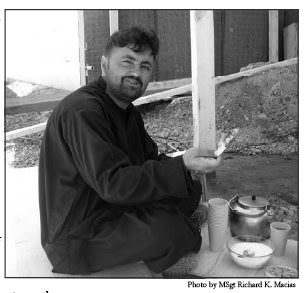 tory goes that in early 2006 Zaman was at a district police station with a U.S. Special Forces Commander for a meeting with the local village elders. Zaman immediately noticed something wrong with the chai that is customarily served and insisted that the Commander not drink it. When questioned about the seemingly rude behavior, Zaman stuck up for the Commander arguing that they just weren’t thirsty. Shortly after, a gunman stormed in and shot them both at point blank range. Although the SF Commander sustained 2 gunshot wounds and Zaman was shot 4 times in the legs, Zaman managed to save the day – and the Commander – by advising him to stop screaming lest the gunman come back and finish the job. Fortunately both were MEDEVAC’d to Bagram Air Field for treatment. The Commander eventually returned to the states and Zaman to his home district of Zormat.

He showed up at the gates of our camp not long afterwards, ready to get back to work. The only problem was that he had raging infections in his legs and could barely walk. With the help of the American medics, he was literally put back on his feet. Often writhing in pain from the screws in his leg, he was given a “Gator” vehicle ride around in to ease the amount of walking he had to do.

Last June, as I hopped into a Humvee to ride to Kabul so I could go on leave, I saw him rolling across our camp in his Gator. He waved at me and with his usual big grin yelled, “Goodbye Cole! Have a good time with your family! I’ll miss you!”

That was the last time I would see Zaman. When I returned to my camp following stateside leave a month later I was met with the news that Zaman, on his way home for his two days off to see his family, was kidnapped and beheaded by Taliban militants.

Reading the intelligence report, my eyes welled up with tears and the news of the loss of a good friend. Zaman had two daughters and a wife at home whom he loved to be with. It was suspected that he was long a target of the bad guys for his support of America and the new Afghan government. That was an understatement. He wasn’t just a supporter; he was an Afghan Paul Revere. Maybe that’s what got him killed. But he was enamored with the idea of freedom, a concept that was foreign to him for most of his life. To him, freedom was a cause to which he was willing to give everything for. It wasn’t a business opportunity, it was hope that his daughters would grow up in a better world than he did.

His is just one of many similar stories of Afghans and Iraqis dying in service to their country, each day bearing the courage of freedom and hope for future happiness. Afghanistan lost a great patriot that day and a year later, I still find myself mourning the loss of a friend.

This Memorial Day, I remember Forrest Ewens for his sacrifice, for his love of good, and his devotion to his fellow man. I also remember Mir Zaman, who is the finest example of a patriot and believe in the freedom doctrine. Both will especially be in my thoughts along with a handful of others I know who were killed as a result to their dedication to helping build a free and independent Afghanistan and protecting the world from ugly terrorism.

To those who gave all, thank you. We still remember.